Princes going bald: What can you do to prevent hair loss?

The Princes are going Bald… if they can’t prevent hair loss, can we?

Hair loss has affected many people, and unfortunately, the British Princes too.  Prince William has been going bald for some time now. However, Prince Harry’s hair loss journey has just begun, and most fans find it difficult to accept! The real question, however, is why the princes are going bald? Moreover, what are the possible solutions to prevent hair loss? In this article, we will be discussing how to prevent hair loss.

A large number of men and women within Britain are victims of hair loss. The concept of males going bald, however, is mostly because of the testosterone, making it a genetic issue. Sadly, both the British princes are also part of this issue.  While Prince Williams hair loss is quite substantial, Prince Harry’ hair has also started to thin up. Even Dr. Shahmalak of the crown clinic states that Prince Harry has been experiencing hair loss for two years now.  It is important for Harry to prevent hair loss, or else he will go bald in the next ten years. A consultant plastic surgeon in Birmingham (ken Kok) observed Prince Harry’s hairline and stated that his hair loss was genetic, just like his brother and father.

Male pattern balding, according to the NHS, is the most typical type of hair loss amongst men who are around 50. It initiates at the age of 20 to 30. It commonly starts at the hairline and then moves towards the crown and temples. In Prince Harry’s case, however, it began at his crown, which creates a horseshoe shape at the back and side of his head.

How to prevent Hair loss

There are many steps that one can take to prevent hair loss:

No one knows for sure whether Prince Harry has officially taken a step to prevent hair loss. But the NHS suggests two options to prevent hair loss: finasteride and minoxidil. They also warn everyone when they give this recommendation, saying that these treatments aren’t always successful on every one.

If you feel that hair loss is imminent and want to do something about it then feel free to get in touch with us on 0800 043 0993 or send us a message here. 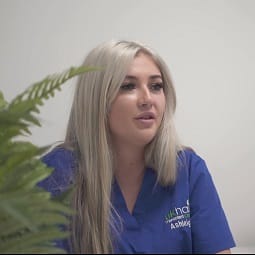